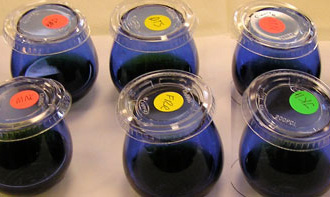 The secret is out – high school students love olive oil! When the 1958 movie High-School Confidential appeared, girls were taking home economics classes and boys were taking woodshop. Times have changed and so have notions about curriculum and gender-separated classes. With the popularity of reality TV shows like Celebrity Cook-Off, Top Chef, Jamie at Home, Chopped, and Cupcake Wars, a new interest has emerged in cooking. It’s going as viral as the latest mobile app - Culinary Arts courses in high schools across the country.

I was recently asked to speak at a local high school in northern California on the virtues of extra virgin olive oil, or EVOO. My presentation, entitled “EVOO & U”, was designed to introduce high school students to the world of olive oil. I started with a quiz (as a former high school history teacher, I can’t resist), then I told them about the history of the olive tree and olive oil; next we discussed the many uses of olive oil; and, I ended the session with a taste test using two quality extra virgin olive oils and one major supermarket brand. But you don’t have to be in high school to attend this olive oil class. Sharpen your No. 2 pencil and let’s begin.

First, let’s see how smart you are. (The answers are provided at the end of the article – no looking ahead!)

A bit of history

My historical discussion includes a brief timeline of the significant milestones of the olive tree and olive oil including:

This is where the students get to share their knowledge and experiences with olive oil. When I asked them how they use olive oil, many commented that they drizzle it on their salads or vegetables, but most said they ate it with bread. When one of the star football players commented that he, “drizzles olive oil on his popcorn”, some of the students shrieked with amazement, while others confirmed they had also tried that and liked it. Many of the students said their parents cook with olive oil and follow a Mediterranean-style diet. One student said she heard that, “Katy Perry eats a lot of olive oil”, and was followed by another who volunteered, “Did you know that Mariah Carey uses olive oil on her hair?” I shared stories about the various topical uses of olive oil for the hair and skin, and the students were fascinated to hear that so many celebrities use olive oil in and on the body.

As we all know, experience is the best teacher, so for the taste test, I used three different olive oils: (1) a medium intensity EVOO (from Arbequina olives); (2) a robust intensity EVOO (from Italian varietals); and, (3) a supermarket brand that really wasn’t olive oil at all but a mild, unhealthy refined olive oil. After explaining the definition of extra virgin olive oil and what to look for on a label, including harvest date, the students were given the opportunity to taste the olive oil out of individual cups – using the swirl, smell, slurp, and swallow technique (from Nancy Ash, Strictly Olive Oil). We discussed the positive attributes of EVOO - fruitiness, bitterness and pungency - and the students were taught specific tasting terms to describe the aroma and taste of the oils. When the robust EVOO initiated coughs throughout the room, I related that sometimes oils are jokingly referred to as one-, two- or three-cough oils, and that the pungency and bitterness are antioxidants, which is one of the reasons that olive oil is so good for you.

And the result? The students were surprisingly good at discerning the differences between the different olive oils. Once they had a chance to taste and then “compare and contrast” the certified and true EVOO with the supermarket brand, they were shocked at the difference. They vowed from then on only to buy (and encourage their parents to buy) true, certified extra virgin olive oils.

It was so refreshing to talk with these high school students and know that a new generation of olive oil-lovers will carry the torch (lit with olive oil!) with an even greater appreciation of Athena’s gift. If you love olive oil as much as I do, share your own insights with friends, young and old alike. Conduct your own class and be amazed at the results.

1. Illumination and on the skin