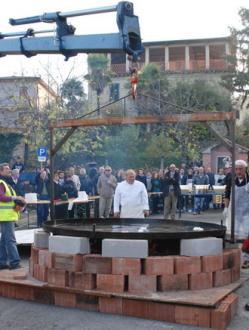 I love making a frittata. It’s an easy-to-make, healthy meal and a great way to express your creativity. All you need are your favorite vegetables (mine are zucchini, bell peppers and artichokes) along with onions, eggs, cheese, and of course extra virgin olive oil - and if you have one, a “gira frittata’’ pan to easily flip/turn your frittata.

Last November, during my Olive Harvest Adventure trip in Italy, I was able to participate in a frittata-lover’s dream come true – an attempt to set a Guinness World Record for making the world’s largest frittata.

Where it happened
What world record was attempted in the Italian town of Fabro?The event was held in Fabro, a small medieval hamlet in Umbria, dominated by an 11th century castle and surrounded by thick fortification walls. It was timed to coincide with the annual truffle fair, known as Mostra Mercato Nazionale del Tartufo, which takes place during the second weekend in November. Thousands of visitors come to sample truffles from the area, specifically the Tuber Magnum Pico (the white truffle).

The narrow, winding streets are lined with vendors selling roasted chestnuts, grilled sausage, pecorino cheese and truffles. In the town square, or piazza, a large wood fire pit was set up and volunteers gathered to make the largest frittata in the world. A local master blacksmith created a huge hand-made pan and lid, measuring 250cm (8' 2.4") in diameter, for the occasion. 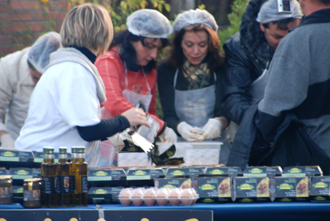 After our delicious lunch in Casa Meravigliosa, the Fabro home of celebrity chef Anna Mosesson, we ventured to the piazza, where at least 30 Italian women stood behind a circular row of tables preparing to crack the eggs. I was invited, along with one of my guests, Pam Shaia, owner of a specialty store in Florida called From Olives and Grapes, to help out. We donned the required hairnets, aprons and gloves (reminiscent of Lucy and Ethel from the I Love Lucy show) and were quickly ushered to our spot. With the blow of a whistle, the egg cracking began with gusto. Pam and I must have cracked and beat over six dozen eggs, firmly convinced that we were the best, fastest egg-crackers in the group! After a grand total of 2016 eggs were cracked, the women were asked to leave and the men took over. An older Italian gentleman kindly explained, “Only men are now allowed behind the barricades because of the fire and heavy equipment involved.”


The thrill of victory 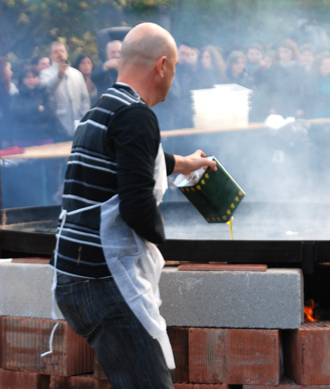 A huge crane lowered the bottom of the pan onto the wood fire and the men doused the pan with olive oil, and then poured the egg mixture into the pan. An Italian TV celebrity chef in full uniform creatively circled and danced around the pan, directing the men who gently stirred the mixture in the pan with large wooden paddles. Grated truffles, donated by local hunters, were added in large amounts (yum!) Once it was determined that the eggs had cooked enough, with cheers from the crowd, the crane lowered the top of the pan (also heavily oiled) to cover the frittata, and the lid was secured. Then, to the gasps and cheers of the crowd, the crane lifted the pan and flipped it over. Amazingly enough, very little of the frittata seeped from the pan during the flip. Onlookers were applauding and reporters, photographers and TV crews were hanging out of second-story windows, capturing every detail.


The agony of defeat
But, alas … the cheers subsided when the bottom of the pan was lifted. A large amount of the frittata had stuck to the pan. Why? The general consensus was that that there was not enough olive oil in the pan to begin with. And because of that, the frittata was considered imperfect and was disqualified. However, the groans of the crowd subsided as small plates of frittata were passed around. Despite its appearance, the frittata tasted delicious. The chef and the crowds ate their frittata, swallowed their disappointment, and vowed to try again in 2012.

The announcement of the 2012 Fabro Truffle Festival will be made soon and I intend to be out in front again cracking eggs with my 2012 Olive Harvest Adventure guests. But even if you’re just preparing a frittata for one, remember the lesson from the makers of the world’s largest frittata – for the perfect frittata, be sure to start with enough EVOO!

Here is my favorite frittata recipe: 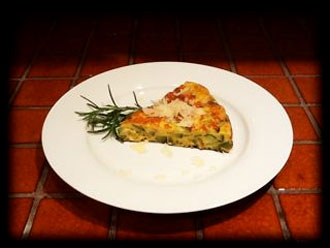 
Note: if you do not wish to try to invert the frittata, you can put it under the broiler in the oven, until it is firm and golden in color; or if you travel to Italy, you may find a “Gira Frittata ” - “turn the frittata” pan for easy flipping or you can buy a similar pan at a gourmet cooking store.