GRINDING THE OLIVES INTO A PASTE
The two main types of crushers are stone mills and hammermills. There are also metal tooth grinders, although these are much less common. One of the most common myths about making olive oil is that stone mills are superior to hammermills and other metal crushers. This notion must be based on the romantic idea that old-fashioned methods are better. This is not the case. Different equipment have different pros and cons, as you will see below, but the notion that stone mills are superior is mainly a marketing twist to sell olive oil. 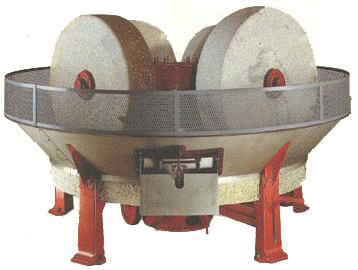 Stone rollers or wheels roll in circles on a slab of granite to grind the olives into a paste. They are sold in different configurations, with two, three, or even four stones.

Hammermills
A hammermill has swinging arms that push the olives into the sides of a rotating chamber through centrifugal action, similar to a home garbage disposer. The mill may have one to several hammers.

Pieralsi double-hammer/double-grid mill setups allow a decrease in the bitterness sometimes found when using traditional hammermills. The mill rotates much more slowly than traditional hammermills and the size of the grids can be changed to optimize the crushing process based on the characteristics of the olives. The olive skin is not pulverized as in other hammermills but torn open, in a way that is more similar to stone mills.

We include these for the sake of completeness, although they are much less common than hammermills. The olives are fed into the center of the grinder. An electric motor attached to a toothed grinder pulverizes the olives as they are flung away from the center.

Destoning the Olives First
This is a fairly uncommon practice. Some studies show that destoning lowers olive oil yields by less than 1.5%. Gas chromatographic comparisons of oil made either way show that stones do not make any distinctive contribution to the flavor of the oil, since they are made of primarily lignin and other woody compounds. There is some debate on the usefulness of this technique.

Most malaxers are made of a horizontal trough with spiral mixing blades, although some have vertical troughs. The vertical ones are generally known to produce a lower yield. Some are covered, and inert gases can thus be used to decrease oxidation.

Heating
Heating the olive paste will decrease viscosity and improve the separation of oil and water. This increases the yield. Heating speeds oxidation and enzymatic breakdown of the paste, however, resulting in a lower quality product with higher acidity and peroxides. The oil has a shorter shelf life.

Using Inert Gases
To discourage oxidation, mixing tanks such as the Pieralisi "Genius" system can now be ordered with covers that contain an inert gas such as CO2 or Nitrogen, allowing increased yield and flavor without the danger of oxidation. Mixing chambers kept under a vacuum will accomplish the same purpose, but cannot remove as much oxygen as an inert gas blanket.

SEPARATING THE OIL FROM THE VEGETABLE WATER AND SOLIDS
The next step is to separate the oil from the water and the paste. This can be done (or was historically done) in the many ways described below. Most systems fall into two main categories: presses and centrifugation. Nowadays, centrifuges are used almost exclusively, aside from old operations.

Historically, olive paste was put on round mats or in burlap bags, stacked, and squeezed with a long lever weighted with stones, or via a twisting screw. These presses were bulky and inefficient, since the pressure was low and the process discontinuous. In addition, the mats or bags were nearly impossible to clean. The olive paste in this photo was being squeezed in "sacceto" bags.

Because it was not possible to extract all the oil in the “first press”, hot water was added to the pomace to help release additional oil, and a second press (or several) was done, hence the terms first press and cold press which are now pretty much obsolete, even though still widely used improperly for marketing reasons. 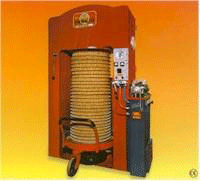 This is somewhat similar to a hydraulic car jack: a piston squeezes the paste that has been applied to stacks of disk-like filters.

These days, modern facilities all use a centrifuge-based system of extraction, also referred to as horizontal decanters. The traditional centrifuges (still commonly used) are three-phase: they spin the olive paste in a horizontal drum; the heavier flesh and pits go to the outside and the water and oil are tapped off separately from the center.

These are similar to the centrifugal decanter described above, but some of the vegetable water is recycled to extract more from the pomace. The water, oil, and pomace are simultaneously removed in a single step. This is the most modern machinery available at this time.

There are different advantages and disadvantages to two-phase vs. three-phase systems, in particular in terms of waste disposal. 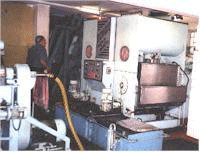 Rows of metal discs or plates are dipped into the paste; the oil preferentially wets and sticks to the metal and is removed with scrapers in a continuous process. This is not very commonly used and sale of future machines is currently outlawed in the European Union due to the difficulty of cleaning such large surface areas.

FINAL SEPARATION OF OIL FROM WATER (WHEN NEEDED)
This is the final step. Depending on what equipment was used in the extraction process, this may be unnecessary. When a hydraulic press is used and the liquid output is a mix of oil and water, with microscopic bits of olives, this final separation of oil from water is obviously required. In the case of separation with a centrifuge, when the product is almost completely oil, this step can still be beneficial (especially in the case of very ripe, overwatered olives when the oil has not separated perfectly in the first centrifugation), but it is not always an absolute necessity.

Separation by Gravity
The oil and water are put into tanks where they separate by gravity. This method is not used in any modern facility. It is inexpensive from an equipment point of view but very time-consuming, bulky, and leads to wasted oil if the separation is incomplete. It can also lead to a deterioration of the oil. 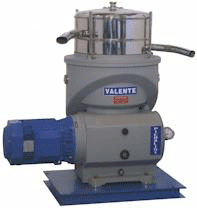 Like a cream separator in a dairy, the liquid is spun, separating the heavier water from the oil. Vertical centrifuges with perforated conical discs can act as either:

SUMMARY OF ADVANTAGES AND DISADVANTAGES
We have summarized the key advantages and disadvantages of the main methods in the table below.